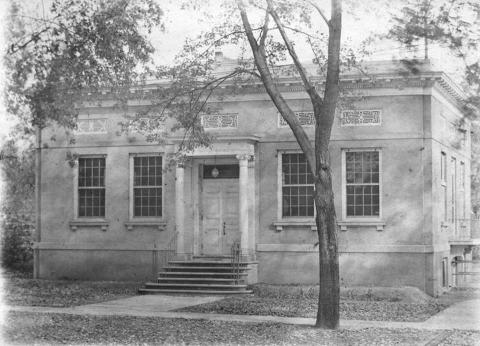 The public library as it stands today at 67 South Main Street in New London was the vision and inspiration of Elizabeth Nancy McConnell. McConnell was the daughter of James A. and Elvira Hackett McConnell and was born September 14, 1843 on the family farm located south of New London. McConnell received her early education in the local schools and later began teaching in the country schools of New London and Greenwich Townships. After completing more education, McConnell began teaching in primary grades in the New London Schools, and in 1875-1876 taught a term at Milan, Ohio. Due to her father's death in 1876, McConnell returned to New London as a companion for her aged mother. She again began teaching in the New London schools and taught intermediate grades and high school. McConnel's teaching career took her to Wellington and Urbana for several years and she eventually became the assistant high school principal in the Wellington schools. After two years as assistant principal there, McConnell's work took her to Lorain where she served as high school principal for 13 years.

In 1899, McConnell turned her thoughts and labors to the study of librararianship. She began her study in conection with the Cleveland Public Library where she was employed for five years with special interests in children's works and the Orientalia collection.

When the National Education Association met in Cleveland during the summer of 1908, the library section held meetings at Cleveland's Woodlawn branch with McConnell attending. Among the many questions discussed was the matter of more libraries for smaller towns. McConnell became inspired to turn an eight-room house that she owned in New London into a library. Although her idea met with discouragement and disparaging advice, McConnell prepared to put her vision into action. The late W.H. Brett, head of the Cleveland Public Library system, encouraged and assisted McConnell with gifts of furniture and books for the new library. Many other gifts from library friends, pupils and various organizations were received and McConnell opened the library in her home to the public on New Year's Eve 1910. At the opening, the collection consisted of over five hundred books most of which McConnell had purchased.

For six and one-half years the library was maintained in the McConnell home, solely by her own efforts. Then the opportunity to secure a proper library building through grants from the late Andrew Carnegie became available and McConnell along with other interested parties in the New London community made application to receive funding. A $10,000 grant was awarded the group upon condition of the village meeting the grant requirements. Cleveland attorney Homer H. Johnson, a former New London resident, have the building site, secured additional fixtures for the interior, and secured the services of Mrs. Helen Martin to act as assistant to McConnell during the first month of establishing the new library.

Through the Carnegie grant, a new building was erected at the present location and has remained open since July 1916. Through legislation at the state level, funding for public libraries has evolved and allowed public libraries to remain the cornerstone of the local community.

(From Then and Now, The Newsletter of the New London Historical Society, Volume XII, Issue 2, November 2007 from an article submitted by Anne Dallas Budd of Ashland, Ohio which appeared in the Ashland Times-Gazette 3 Oct 1931 p. 3, in the New London News column by Mrs. Jeanette Culbertson,)